Scotiabank Arena is a multi-purpose, 665,000 square foot arena located in downtown Toronto, ON. The facility has hosted more than 30 million fans and more than 2,000 events, including hockey, basketball and lacrosse games, concerts and live events since their doors opened in 1999. It is the home of the NHL's Toronto Maple Leafs, NBA's Toronto Raptors, the Toronto Rock Lacrosse team and has been host to some of the best entertainers in the world. Ranked as one of the top five entertainment venues in the world, Scotiabank Arena is the eleventh busiest arena in the world.

MLSE hired system integrator, Digital Display & Communications Inc. (DDC), as a consultant in the early stages of the project and then contracted the company to design, build and integrate the system. Due to the complexity of content, playlists and the size of the network, MLSE selected Omnivex Moxie software to power the network. Moxie provides customers with a sophisticated set of tools for managing large networks of screens. The software builds on Omnivex' core competencies with data management and includes advanced functionality for user access rights and managing advertising networks. "Omnivex Moxie software rose to the top for this project because it has powerful graphics capabilities and for its advertising, content management and strong IT support tools. Moxie will allow the content to be tailored to each location according to the specific event, audience and time," said Stuart Kirkpatrick, President and CEO, DDC. With very tight timelines, a truly collaborative team effort had to be well planned and executed within a complex supply chain.

The first phase of the deployment features 52 player PCs driving content to 360 display screens. The screens range in size from 32 to 82 inches, are strategically placed for maximum impact and are configured in unique ways to add to the aesthetic appeal of the facility. The deployment features 14 unique display configurations using a variety of display technologies. In some cases, one player is running one screen, 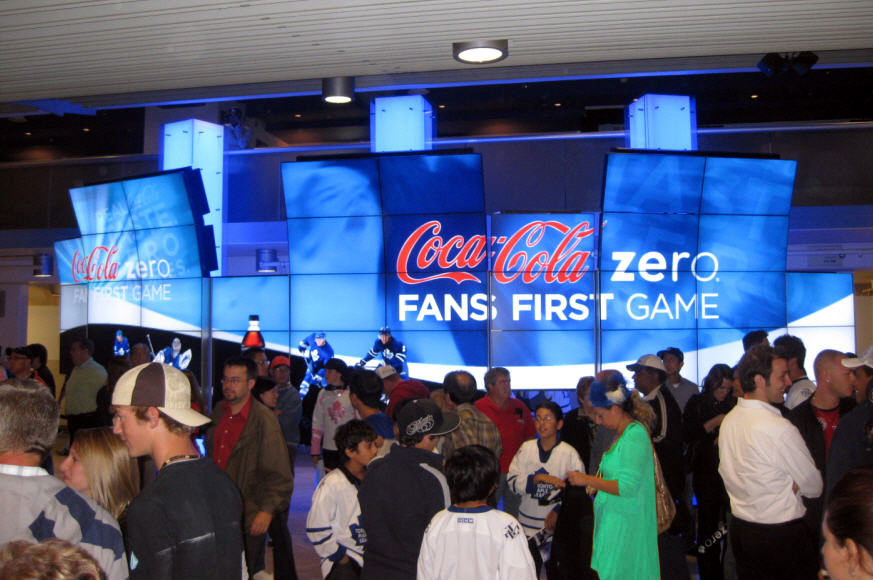 in others one player is driving a four-screen diamond, and there is even one case of a single player driving 42 screens that form a multi dimensional video sculpture. Video walls of many shapes and sizes are located throughout different areas of the concourse. The system also includes content displayed on large, full color LED boards and long LED tickers. There are even cylindrical 360-degree LED video displays on the network. In other areas of the facility, projectors are displaying content on large areas of a wall. All of these various types and configurations of displays are managed remotely using Moxie software.

A totally new paradigm had to be sold through to the current corporate partners requiring support collateral in terms of any creative challenges/opportunities and the notion of "time" on a network vs. simply buying space on a billboard. "One of the main goals was to retain and grow our sponsorship relationships by providing our corporate partners with a more powerful tool to reach their audience. Our digital signage deployment has delivered that and much more," said Bob Hunter, executive vice-president, venues and entertainment, MLSE. Advertising space is sold on the screens based on "prime" time (when there are more people out in the concourse, such as during an intermission) and "fringe" time (when the game is on and fewer people are in the concourse). Moxie software has the tools to automatically determine which ads to play and how often based on whether they are operating on fringe or prime time.

Content creation has become a new revenue stream for MLSE. "We now make eighty percent of the advertising content displayed on the network for our sponsors, because Moxie software allows us to make that content for less cost and more rapidly than the advertising agencies could," said Dean Bender, Director of Content Production and

Venue Services, MLSE. The system also allows for all of the screens throughout the facility to change to a special sponsor branded message when desired, such as when a goal is scored.

Scotiabank Arena hosts many different types of events, so MLSE needed a content management system that would allow them to quickly and easily create and deploy different types of content based on the event that was currently taking place. "Although Scotiabank Arena is a multi-purpose venue, it always looked the same," said Bender. "The digital signage has had the ability to transform the facility and make it branded for the specific events," he concluded. The digital signage system also incorporates lighting surrounding the screens to match the team colors and make it feel more unique (for example, if a Maple Leafs hockey game is taking place the lights are blue, while they switch to red for a Raptors game).

During a sporting event, content can include a live video stream from inside the arena to ensure fans don't miss a moment of the action when in the concourse areas. "Digital signage has been a very positive addition to the fan's entertainment experience at our facility having added a new dynamic, visual stimulation to our concourses. Versus our old backlit static signage, we now have an 'attention grabber' both from a vibrant advertising standpoint but also allowing us to display key guest messaging and promotion of upcoming events and features," concluded Hunter. In addition, information to aid in facility navigation and promote upcoming events being held at the various MLSE facilities is being shown.

Phase one of Scotiabank Arena's digital signage system was unveiled for fans and guests during the Maple Leafs' preseason game against the Boston Bruins on September 16, 2009. In 2010, MLSE expanded the Moxie powered deployment to include concession stand digital menu boards and POP displays. Subsequent phases of the digital signage deployment have been identified, both at Scotiabank Arena and at other facilities managed or owned by MLSE.

Digital signage is a great investment that supports changing technology and continues to keep Scotiabank Arena amenities state-of-the-art. "The Omnivex powered digital signage network is a fantastic medium that will keep our fans and guests informed, while providing value to our many partners and stakeholders," said Hunter. "Moxie gives us the tools to effectively manage the system." 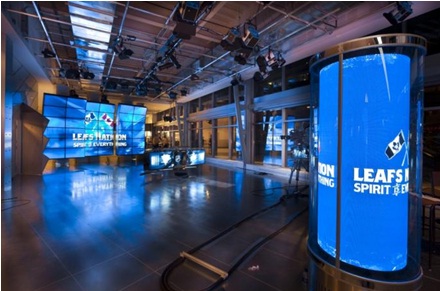 The success of the deployment is summarized well by one of MLSE's corporate sponsors, Terry Spyropoulos, Partnerships and Events Manager, Ford Motor Company of Canada: "The digital signage package from Maple Leafs Sports & Entertainment has given us a significantly more dynamic communications package that allows us to display stronger video creative to support our brand, and gives us much more flexibility to keep the message timely and relevant for the consumer." 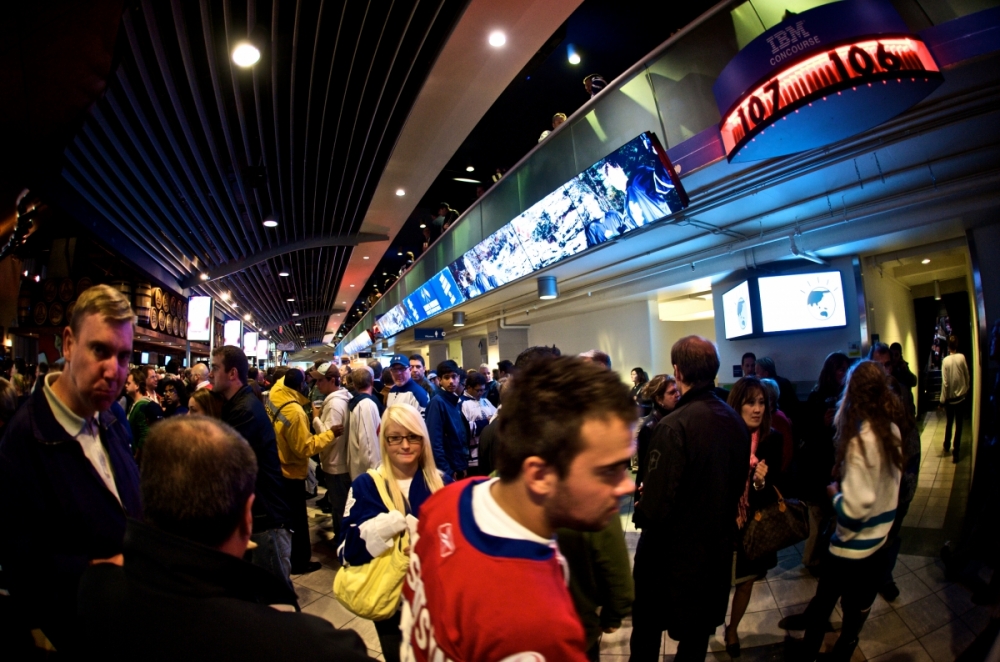 The digital signage system at Scotiabank Arena has been recognized with many awards, including an APEX Award in the Stadiums and Arenas category and the SignMedia Canada Digital Signage category winner. This deployment owed its success to the extensive planning and adherence to applying experienced-based best practices. It also involved tight adherence to a project plan and collaboration, including ongoing communication between all parties involved with clearly defined communication and business objectives.

Have questions about our software, or how digital signage can help your organization?
Reach out - we're always happy to talk.