When multi-purpose stadium, Kirstiansand Stadium was no longer suitable for Norway's IK Start Football team, the new Sør Arena was built. The stadium is named after the Norwegian bank Sparebanken Sør, as part of a sponsorship deal which includes the rights to the stadium name and a shirt sponsorship. Located in Torsviga (an area of Kristiansand, Norway), the new Sør Arena infrastructure alone cost in excess of 60 million $US. The facility's main purpose is to function as the home for IK Start Football team, but is also used for concerts, corporate events and other types of sporting games. Sør Arena has a seating capacity exceeding 15,000.

During the planning stages of the new stadium, management decided that it was important for the facility to have a digital signage system, to augment the fan experience by providing a captivating form of entertainment, communication and facility navigation. The secondary purpose of the system was to operate during the off-season when the facilities were used by corporations to hold training courses, conferences and other commercial activities. Additionally, some companies have their offices located at the stadium, so the signage would be useful for these groups as well, when they use the stadium's new conference rooms or even the entire stadium for presentations and meetings.

The system needed to function in real time and be flexible enough to handle the different types of content that would be desired by the various groups of people viewing the screens, including a live IP-based television feed. Sør Arena encodes and internally broadcasts an MPG2 multicast video stream that needed to be incorporated into the content displayed on the screens. They needed a system with advanced functionality, but that would be easy to manage and update. Management felt that digital signage placed in the entrances of the building, VIP lounges, two restaurants, common hallways, concession stands and outside meeting rooms would ensure fans didn't miss a minute of game play. The system would also ensure the profitability and success of these areas.

Sør was outfitted with more than 130 LCDs and interactive kiosks throughout the facility. Two 28 square meter "wide-aspect" LED monitors were also installed in the stadium itself. Sør needed a software platform that would streamline the management of the LED boards in the stadium with the LCD panels and kiosks throughout the rest of the facility with one cohesive system. 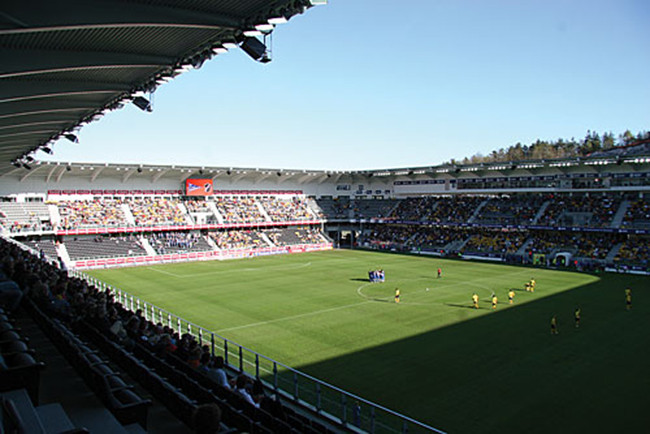 Systems integrator and Omnivex Certified Partner, Hatteland Vision AS of Norway, was contacted by Sør for this project because of their extensive experience with digital signage deployments. "They offered us a great amount of flexibility with regards to tailoring solutions for the different kinds of customers both now and for the future," said Arne Ranneberg-Nilsen, Marketing Manager at Sør Arena. Hatteland Vision has deployed many successful digital signage networks for customers throughout the Scandinavian region in various market segments. "We have had the opportunity to test and work with all of the major hardware and software vendors and feel that Omnivex software is beyond comparison," said Geir Ove Finstad, managing director at Hatteland Vision. "We have used Omnivex for many different projects and knew that it could deliver on all of the requirements outlined by Sør," said Finstad regarding their recommendation of Omnivex for this project.

Using Omnivex's Display 3 software, Sør creates content for the various types of events that are held at the stadium. There are two main operational modes of Sør's digital signage system; either business mode or game mode. Each of these two modes can accommodate the 13 MPG2 multicast streams. Other related content is dynamically incorporated such as sponsor branding, meeting schedules, advertisements, directional wayfinding, game score, and other news or announcements. Content is determined based on what is appropriate at the current time and in each specific screen location. Numerous interactive kiosks, located at the stadium's entrances and corridors, are also part of the digital signage network managed by Omnivex software. These are multipurpose kiosks 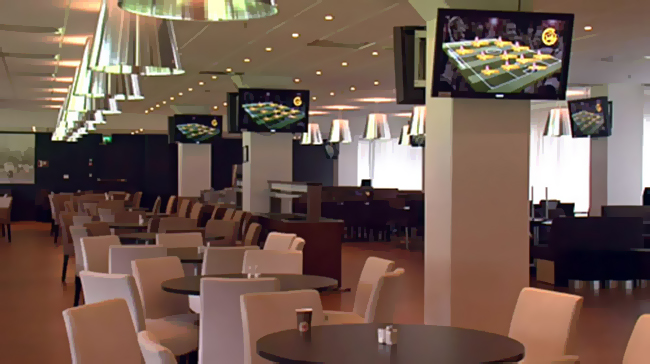 that are used to help guest locate different areas within the facility, meeting and conference rooms, seats, shops and to purchase game tickets. Additionally, when the kiosks are not in use, they display sponsor advertising.

One of the key requirements of the system was that it needed to allow the network operator to manage the content on all of the displays with one system, with the ability to update content remotely from anywhere within the facility. "We wanted to be able to monitor the entire system from one place, but we also didn't want the network operator to be tied to his desk," said Ranneberg-Nilsen. Although the content is primary driven from the control room, there are two handheld PC's running Omnivex software, that give the operator the ability to change content and update the match status (such as score, game time, penalties, etc.). When a goal is scored, the network operator updates the match status on his handheld PC, which triggers the content on the displays to show a pre-defined "GOAL" animation.

In addition to all of the LCDs managed by the Omnivex software, two large graphical LED boards are also part of the same digital signage network. These two boards are located on the top tier, at opposite ends of the stadium, making them visible from anywhere within the stadium. They broadcast a live feed of the game while it is played, as well as commercials and advertising from sponsors during breaks. Replays and game highlights are also shown to increase the excitement at the game. When a goal is scored by the home team, the Omnivex software triggers the internal audio and PA system to play music such as the home team theme song throughout the stadium.

Since Sor Arena first opened in 2007, the digital signage has received much praise. "The response has been tremendous. The fans think it's great, as we have become something more than a football club," stated Ranneberg-Nilsen. It was important to not only entertain fans, but also to give a unique experience in the VIP guest areas and upscale restaurants. "We have had very good responses in our VIP lounges, and our stakeholders have been very pleased with the results of the system," concluded Ranneberg-Nilsen. "Sør Arena has one of the best and most technologically advanced digital signage systems in Europe," he concluded.

There are future plans to make the stadium's digital signage even more interactive. Sør plans to use Omnivex software to allow fans to have more involvement in the game, such as by voting for the most valuable player or participating in contests through SMS, which will be shown on the screens. The stadium also plans to deploy additional screens and interactive kiosks to be used for quick service ordering and menuboard displays in concession stands. Omnivex software would allow Sor to tie the prices and menu items directly to the type of event taking place at the stadium, time of day or inventory levels. "Omnivex software can be used to integrate the digital signage with existing fire detection and emergency evacuation systems, by interfacing with hardware devices such as fire alarms and smoke detectors," says Finstad. "This is something that we plan to deploy at Sør in the future."

The stadium uses the system as a new revenue stream, by selling advertising space to retailers and sponsors. Sør Arena has recruited the services of an advertising company to help businesses promote themselves using the digital signage. Given the number of impressions per screen per year, this is a great place for companies to get noticed. Mr. Ranneberg-Nilsen says Sor Arena's executives are enthusiastic for the future, "Certainly, it helps to have a platform that can accommodate our future plans. We are expecting a lot of income from the digital signage system and we already see revenue being generated from our various screen sponsorship packages. It's also great for our own branding to promote the stadium for ourselves, the conferences, concerts, our customers and our partners."

How can Omnivex
help your business?
Talk to Us